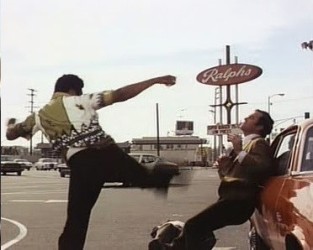 [CHECK OUT OUR DOLEMITE PODCAST!!!!]

Dolemite is my name and f*ckin’ up other mutha f*ckers is my game! Who could not love a rhyming couplet like that?

Doing serious pen time for trafficking in illegal furs (really) as well as half a mil in blow, Dolemite (Rudy Ray Moore) is offered a way out by the warden: in exchange for his release, he has to take out drug kingpin Willie Green, responsible for bringing the “4th Ward” of whatever fictional city this is, to its knees, in cahoots with a corrupt white mayor…The only people in on this plan, the warden, whorehouse madame Queen B and an unnamed FBI agent.

Once the deal is done, and following unnecessary flashbacks and some shaky exposition, Dolemite doffs his peels for a dapper jumpsuit, not even waiting to get home to change: he strips down to his tighty whities right outside the prison gates, brought to him by limo by his bitches (This, as the less than impressed guards call out: “you’ll be back, Dolemite!”).

Meanwhile, the newly freed warrior is harassed by two cops on the take while he goes about his business.

He gets the lay of the land from Creeper, aka, The Hamburger Pimp, a shuffling base head who’s promptly assassinated. We learn that Willie Green has taken over Dolemite’s Dolemite-themed nightclub and big D has to get rid of WG, an original OG. Along with this colorful cast of characters — a reverend who runs guns, a karate-kicking all-female militia force, dancer Chi (short for Chicago) — the omnipresent boom mic is a character unto itself, , at the top and the bottom of many a frame (hey, this is an extremely low budget affair). 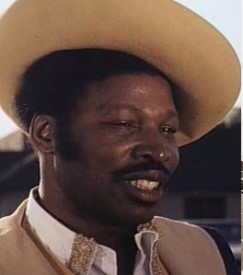 At the center of the mess, Dolemite, who carries BB King’s girth and drops Grandmaster Flashes’ rhymes, an urban poet who delights assembled street toughs and captive audiences alike with parables about monkeys and lions as well as what might’ve gone down on the Titanic had the racial politics been different.

But there’s business to attend to, including avenging his nephew Lil Jimmy’s murder. He lays waste to much of the 4th Ward’s criminal element with half-baked karate chops and elephantine spinning back kicks.

The semi-comatose Dolemite, is still good for the odd line like “You no good rap soup eatin’ honkey mutha f*cka!”

Where can you dine on this specialty? Nobody knows for sure but Rudy Ray Moore has a gift of gab, and a grab bag of put downs that could skewer a dozen Yo Mama wannabes. See, we have skills too.

As an introduction to blaxploitation, Rudy Ray Moore is no Ron O’Neal, can’t hold a lighter to Fred Williamson and sure as hell ain’t Richard Roundtree (though he’s plenty round).

As inept as it is hilarious and beguiling, Dolemite is kinda must-see material — basically an excuse for Moore to showcase his less-than-stellar stand-up, his band and the Dolemite Dancers.