This films hops genres like, well, a Parasite does to a host. Part post-apocalyptic wasteland, part gang film, part natural horror, it leaves all elements wanting. If you’re looking for satisfaction, you’ll have to go seek it elsewhere (like we’re guessing Melania Trump does).

In a distant far-off future, silver has replaced paper money out in the desert, as the local innkeeper puts it, “We use that for wallpaper ’round here.”

“Sickies” are roaming the land, a la every zombie outbreak movie, and survivors are hunkering down, dining on what’s left of the movable feast that was human civilization — relegated to eating out of soup cans.

It’s Hobbesian stuff, and the life of man in the podunk burg of Joshua (population 64) is solitary, poor, nasty, brutish and short. For some, it should be said, shorter than others, especially if they’re to come across the movie’s title critter.

Dr Paul Dean (Robert Glaudini) is a functionary and a geek. And he’s been tasked to devise a mechanism for controlling the human population, which he obliges by creating a deadly worm (a weird conceit as you’d think after an atomic disaster you’d need all the warm bodies you can get). This is at the behest of his bosses, the terribly evil group known as The Merchants. However, knowing that his creation is going to be used for evil purposes, and feeling a sense of moral obligation, Dr Dean makes off with it.

Soon, a ragtag bunch of Caucasian gangsters with no muscle tone are infected. Hey, it was the 80s! 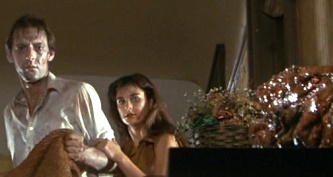 First, it featured the debut of an admittedly stunning, if not that compelling a thespian, Demi Moore. Second, it was originally released theatrically in glorious 3D. And finally, one of the merchants, a slickster government liaison, drives around in a Lamborghini looking like one of the Men in Black. Plus the effects were headed up by Stan Winston.

Still, there’s not much to be said for Parasite. There’s a terrific gut explosion that looks like sun-dried tomatoes. You’d expect nothing less from director Charles Band.