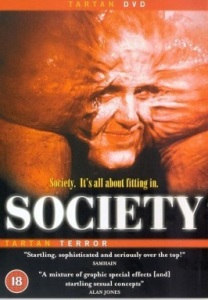 “You know what I blame this on the breakdown of? Society.” Of course that’s Moe from The Simpsons. In the movie Society, social relations crumble around young Billy, a teen lone-man out who noticeably doesn’t resemble his parents nor his sister and who is (unsuccessfully) trying to curry favor with the school’s rich and very popular kids.

If only it were that simple, from both a narrative and a normative perspective. You see, there’s something really amiss with Billy’s suburban Los Angeles family — really, really amiss.

Unlike the typical coming-of-age tale, it’s young Billy who is the moral center and is his center ever upended.

Blanchard, a prying schoolmate who’s been spotted hiding out in Billy’s sister’s closet, has some interesting information to pass along to him, but considering the source, Billy’s more than skeptical. Then, Blanchard presses forward and produces a smoking gun: an audio recording of some truly taboo-shattering chatter, some beyond-risque communication between Billy’s sister and parents.

Armed with the horrifying information that we won’t dare reveal, he marches into psychotherapist Dr. Cleveland’s office, but the audio recording “evidence,” appears to be harmless banter and fashion chat about an upcoming cotillion ball.

Undaunted, Billy presses forward while questioning his own sanity (a student council president hopeful, he hallucinates salacious behavior of an audience member during a candidates’ debate).

But it’s only upon ditching his girlfriend and hooking up with sex kitten Clarissa that things really begin to sharpen into focus in this Lynchian landscape, the brainchild of Brian Yuzna, frequent Stuart Gordon collaborator.

How he went from Honey, I Really Messed up the Kids here to shrinking them later in his career is anyone’s guess.

Proof that a constant undercurrent of dread is worth 1,000 pig entrails, Society is a paranoid Freudian nightmare and unfailingly original.

This is Beverly Hills 90201 by way of John Waters and the Marquis de Sade.

[BE SURE TO CHECK OUT THE REALLY AWFUL MOVIES PODCAST DISCUSSION OF SOCIETY!]