An animatronic band bangs out Sinatra, and the title character hammers out Mendelssohn on an organ in the peerless  The Abominable Dr. Phibes.(Definitely check out our our 10 Memorable Horror Movie Musical Numbers).

And there’s a compelling story to boot: Phibes survives a horrible car crash, with his face hideously scarred. This is soon after the good doctor’s wife succumbs to an illness after nine surgeons try and save her.

That turns him evil.

“Frogs” in particular is a wonderfully hilarious death scene, whereby a masquerade ball is in full effect, and about which the particulars are a little confusing… No matter, Phibes is deep undercover, and because he’s a diabolical genius madman, he’s got something a little more elaborate in store for one of the docs derelict in his duties…And that takes the form of a mask, but not just any mask…A frog mask with a unidirectional ratchet that tightens ever so tightly when placed on someone’s head. This is second only to Mario Bava’s Black Sunday mask when it comes to horror movie mask deaths… 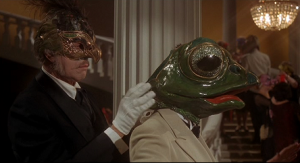 And it’s all held together by the towering presence of The Merchant of Menace, Vincent Price as the title doc. In The Price of Fear: The Film Career of Vincent Price, In His Own Words, the late, great actor recalls “it was agony for me because my face was covered with plastic.” But true to form, Price soldiered through saying, “I giggled and laughed the whole time, day and night and the make up man and I were practically married as the make up kept dissolving…”

And the film’s legacy?

The mad Phibes is an evil renaissance man character who’s spawned imitators, both the obvious (Phantom of the Paradise) and the not-so-obvious (Saw — Jigsaw’s hidden key).

[FOR MORE ON VINCENT PRICE, TAKE A LISTEN AS JEFF FROM THE REALLY AWFUL MOVIES PODCAST, CHATS WITH PRICE’S DAUGHTER, VICTORIA PRICE]