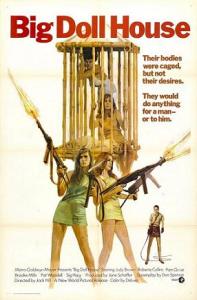 When Pam Grier says, “I like being on top,” you listen; and you’re just grateful to be around.

Unless of course, you’re one of her cellmates in The Big Doll House, a Roger Corman cheapie shot in the Philippines to capitalize on the ever-popular women-in-prison, AKA, WiP genre.

By way of introduction, a lazy flute-fuelled 12-bar blues warbled by Grier herself, finds us in an Asian prison, with shockingly preternaturally attractive women (“You don’t look like a hardened criminal!”). No Big Bertha cellies here.

We’re introduced to prison naming conventions (last names only please) so we get homonym Grier as Grear (for some reason),  Collier, Alcott Harry, Harrad and the tough-nosed leader of the crew, Bodine who has we guess you could say, a take-no-prisoners attitude.

This has to be the most poorly policed prison in the Filipino penal system as guards turn a blind eye to everything:  there are cats roaming free, easily accessible syringes for Harrad the cell junkie, and even a butch guard who can be bribed with mountain moonshine.

No women-in-prison movie is complete without a villain/warden so here we have the late nude Mannheim-born model Christiane Schmidtmer as Dietrich (a name inspired by a shyster Swiss producer with whom director Jack Hill and Roger Corman worked but had a falling out).

Of course, violence is an everyday occurrence (“another perfectly good piece of ass gone to waste” opines one of the deliverymen, B-movie icon Sid Haig as Harry) as are showers, nude frisks, whippings, mud wrestling — all the necessary genre staples.

Collier is the cell newbie, another gorgeous ginger to replace the ailing junkie Harrad as Grear’s girlfriend. She regales the assembled with tales about her ex husband, an eye-patch wearing philanderer who made it with the (male) help, so she offed him. 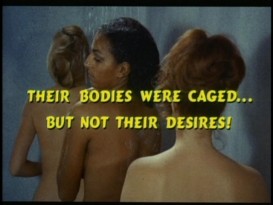 Soon, Bodine is strung up in a bamboo cage for insubordination involving contraband mail and a power struggle ensues as the inmates plot their escape.

“All men are filthy,” one of the inmates suggests, but not so filthy that they’re not exchanging favors with them in exchange for jailhouse perks.

No planetary observatory required to spot Pam Grier’s star power. She’s a total knockout and The Big Doll House put her on the map. Jack Hill cast her in her first role here (to be followed by Coffy) and nearly three decades later she reunited with Sid Haig for the underrated Tarantino production, Jackie Brown.

Languidly paced but lots of eye candy to keep us interested.

INTO WOMEN-IN-PRISON FLICKS? CHECK OUT OUR BIG DOLL HOUSE PODCAST