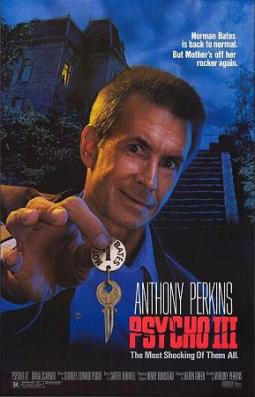 “Aside from total boredom, nothin’ is gonna happen to you here.”

“Here” of course, is the Bates Motel, in this, the Anthony Perkins-directed Psycho III. Its predecessor was shocking, not just in terms of physical jolts but the fact that it was undeniably capable, and a worthy successor to the Hitch original.

Not so much here, as there’s a vertiginous quality drop-off as the series adopts some silly slasher boom affectations.

And what better way to do that than with a dumb prologue? Maureen Coyle scales a convent tower to end it all. When another nun intervenes, she’s the one who takes a tumble, getting her bell wrung on the way south. Overcome with guilt, Maureen drops the habit and hits the open road, hitchhiking alone a stretch of California highway.

Duane Duke, who goes by “Duke,” is a skeezy itinerant musician who takes fashion cues from John Cougar Mellencamp. He picks her up in his dilapidated ride, and when Maureen rebuffs his advances, she’s dumped by the roadside, a short walk from where? You guessed it, the Bates Motel.

Ridiculously, in the time it takes for Maureen to bemoan her fate, Duke has already secured a job at that very same motel, taking the day shift as creepy proprietor Norman (never “Norm” or “Mr. Bates) “prefers nights.” It’s temp work, to tide him over until he writes his own little ditty about Jack and Diane. When Maureen arrives, she accepts a room key despite Duke’s wandering hands, and in Room 1 to boot, steps from the concierge desk he now occupies. Inane stuff.

Enter LA journalist Tracy Venable, who conveniently happens to be putting together a feature article on ex-felons re-entering the community. She’s sniffing about asking probing questions. It just so happens she’s offered a pack of Bates Motel-branded matches by lecherous Duke in a bar. She immediately puts him on her magazine’s payroll in exchange for the low-down on boss ex-con Norman. (This was back in the day when journalists had more resources than crowdfunding at their disposal.) 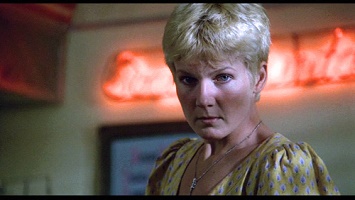 Then of course, there’s Emma Pool, Tom Holland’s creation from the first sequel, stashed up in Norman’s pad.

Her disappearance is all over the papers and the focus of much talk.

Naturally, amidst all the hubbub Norman “just wants to be left alone in peace.”

Psycho III incorporates many of the 80s slasher conceits of the period. There are also fewer vacancies at the motel, as it’s football season, a clear and obvious means of ratcheting up the body count.

[Interested in Psycho sequels? Check out our Psycho II podcast]