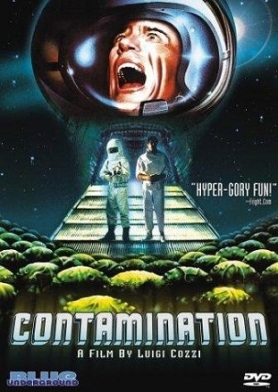 [***CHECK OUT OUR CONTAMINATION PODCAST***]

A large vessel is bobbing and drifting in the Hudson River. And Captain Sully is nowhere to be found.

The floating ship actually contains (or more accurately, cannot contain) some space-borne pathogen in its cargo.

Contamination has all the elements of a great horror, until you find out it’s directed by Luigi Cozzi, the man whose prodigious artistic vision spawned the batty Star Wars cash-in, Starcrash.

In the vessel’s hull are shipping containers ostensibly full of coffee from South America, say, on a plantation which would keep Juan Valdez in indentured servitude. However, they contain pulsating green eggs that look like re-purposed watermelons, which when touched, explode. It’s an experience you’d get if Cronenberg’s scanners opened their own bistro.

And speaking of food, in one scene, green olives are used as alien egg-surrogates! A vodka martini please…perhaps this was a subtle manifestation of Cozzi’s opposition to producers wanting more James Bond espionage than sci fi elements.

Turns out the space contaminants were brought back from an ill-fated Mars mission. And there was something up there…something weird!

Brit astronaut and Martian rover Hubbard  (Ian McCulloch, the man lacking a plan in Dr Butcher MD) is shell-shocked upon his return to earth, a discombobulated alcoholic. He’s conscripted to help a federal investigator find out what’s behind all the watermelon/olive IED explosions.

And this all leads to a cyclops alien inhabiting a coffee plantation down in Barranquilla, Colombia (incidentally, the birthplace of tacky rump-shaker Shakira) and somewhere liable to pass along a lot of tax credits to foreign directors.

Contamination is wild. There’s lots of fumigation, lots of gore (and lots of open shirts as this is Italian).

It’s really all over the map though, taking elements of cannibal movies (languorous aerial shots of The Big Apple, wandering around in jungle vegetation, copious gore) as well as sci fi and yes, some helpings of James Bond (one of the facilitator villains is Blofeld-esque).