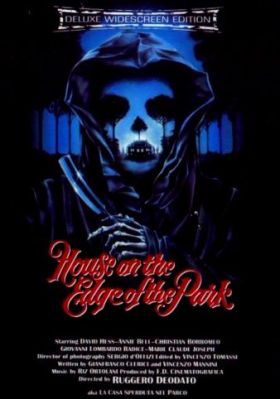 Two mechanics menace a group of friends in a suburban New Jersey house. House on the Edge of the Park is basically Last House on the Left, mimicking Wes Craven’s in-your-face (and better-paced) Cinéma vérité  dynamic.

Alternately cheap-looking and lush, House on the Edge of the Park packs a sleazy roundhouse punch.

Still, the emotional attachment viewers had with the young concertgoers in LHOTL is absent here, and a suburban house doesn’t match the scares Craven exploited in his woods.

Instead of Krug, he’s Alex here. He’s a Studio 54 Bridge & Tunnel sh*thead who, along with slow-witted buddy Ricky (Giovanni Lombardo Radice), fix a couple’s car in their garage after-hours and somehow weasel their way into the duo’s plans to cross the river for a “get together.”

The partying avant-garde types, Tom and Lisa, reluctantly invite them along to the shindig, somewhat charmed by Alex and Ricky’s blue-collar authenticity.

Speaking of authenticity (or lack thereof), Giovanni Lombardo Radice (AKA, John Morghen) plays the sadist sidekick Ricky. Lombardo Radice is menacing as Ricky, with some of the oddest dance moves committed to celluloid, but has expressed nothing but scorn for the genre that’s made him a comfortable living and garnered him much adoration. (“It’s quite strange to be loved and at times idolized for something you don’t like yourself” is among the tamer statements he’s made about his body of work when he’s not being downright hostile.)

When mulling over a possible sequel to The House on the Edge of the Park, both he and director Ruggero Deodato “agreed [the first film] was too violent.” Well, who gives a crap about your opinion frankly? We’ve chatted with him at conventions and he’d clearly rather be elsewhere, but his more artistic endeavors don’t pay the bills.

We’ve had the luxury of talking to enthusiastic up-and-coming filmmakers and actors, all of whom are committed to the genre and trying to make great art (a designation which usually eludes horror and certainly eludes this film.)

But that’s hardly the issue here.

You can’t necessarily expect great art from a cheap Italian knockoff like The House on the Edge of the Park. But there’s simply no character investment. In the Last House reboot, the Collingwoods are relatable suburbanites. Many a reviewer has pointed out just how repellent the hipper-than-thou partiers are (and some have suggested they even deserved their fate).

Deodato, by his standards, uses gore sparingly save for one torso scene. He does deliver the bona fides, even if the film overall is somewhat detached and even boring at times.

One thought on “The House on the Edge of the Park”