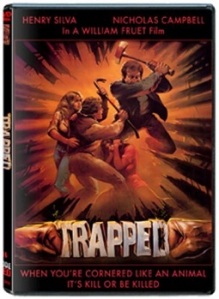 Two suspender-and-overall yokels watch a hunter get it on with his paramour in the woods.

The rustic coitus is interrupted when one of the dim-bulb interlopers falls into a creek trying to sneak a closer look.

Where do you go after an opener like that?

Surprisingly, to the other end of the intelligence spectrum, college, where we are suddenly in the midst of a heated classroom debate on the morality of taking a human being’s wife. Then we’re whisked to a ballet tryout to the strains of Beethoven’s Fur Elise. In Baker County, U.S.A., the low to highbrow transitions will cause whiplash.

From there, we’re introduced to the usual college road-trip. It’s the usual assortment of college student stereotypes planning a weekend getaway to the woods via, of all things, an access road, which is all but a guarantee there’ll be three quarters of ‘em who won’t be making it to class the following semester.

You just know the kids’ path will soon cross with rednecks. In these woods, in as ramshackle a shack as you’ll ever see – chickens running about, a bunch of unconvincing southern “shee-it” cussing – we find the hunter again.

This time, it’s he who stumbles upon lovebirds who’d sooner not be seen: his girlfriend with another man. He takes the wrath out on the suitor, because the hunter’s “got his rights.”

He shoots his rival’s wheels out, and worse.

To celebrate, the hunter demands the townsfolk break out their finest corn whiskey and everyone drinks out of mason jars while the soundtrack serenades with banjo joy and he paints the man’s back with scalding asphalt.

Henry Silva (The Manchurian Candidate and Alligator) is menacing as the inbred hillbilly backwoodsman.

We’re Trapped here in a film directed by William Fruet: He’s the man responsible for the excellent revenge flick, Death Weekend (aka The House by the Lake) and best known north of the border as co-writer of Goin’ Down the Road, even better known as a popular spoof on SCTV featuring John Candy. And his Canadian passport is betrayed here by a few “eh’s” casually dropped into the dialogue.

If you’re a fan of Canuxploitation, do yourself a favor and double bill Search & Destroy and Death Weekend.