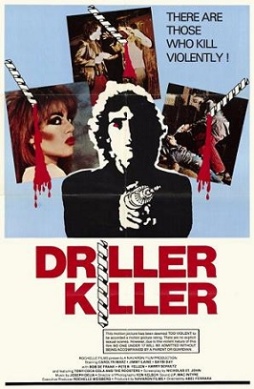 He puts the torture in “tortured artist” but otherwise THE DRILLER KILLER is a bit of a bore, in both senses of the word.

It’s weird, as this hits all the right notes in terms of the kind of thing that interests us here on the site: depictions of gritty urban environs, a sleazy underworld aesthetic, gobs of nudity, atonal soundtrack, a great horror movie weapon and yet…

Abel Ferrara (Bad Lieutenant) is artist Reno Miller, a midtown Manhattan denizen plagued by money problems, who fails to secure a loan for the month’s rent from a wealthy benefactor and has roommates who run up the phone bill.

Compounding his problems, he’s being driven to the edge by a crappy band, The Roosters, rehearsing at decibel-shattering levels beside his studio apartment.

(We’d be annoyed too, as the band’s bass-heavy hit rips off Henry Mancini’s theme to Peter Gunn, which is the soundtrack of choice when stealing state secrets or deleting masses of emails).

Reno tries to get the landlord to intervene, but instead of interceding on the artist’s behalf, the landlord gives him a skinned rabbit. Reno proceeds to stab the hell out of it, a terrible waste as they’re great in stew.

So much for staving artists.

Reno then goes on a killing spree with, not surprisingly, a drill, targeting New York City’s homeless. The Driller Killer is notable for a killer who specifically targets male victims but not for much else. There’s some permit-free guerrilla style wobbly camera work near Gramarcy Park and in the subways, but…maybe it was just the print reviewed. Murky and meandering. 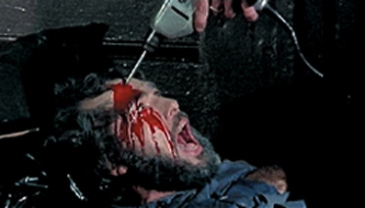 One critic calls The Driller Killer “a powerful study of how the desolate cityscape leads to mental decline,” but that’s a stretch of barre/balletic proportions.

It’s all pretty tepid stuff, interesting only for capturing the East Village/St Mark’s Place glam/punk scene of the late 1970s, the so-called “No Wave” period.

For completist fans of the “video nasty” era only, even though there are far better examples from that period including the extraordinarily filthy The House by the Edge of the Park, The Toolbox Murders, Dead and Buried, Don’t Answer the Phone, etc.

[CHECK OUT OUR PODCAST OF THE TOOLBOX MURDERS]

One thought on “The Driller Killer”