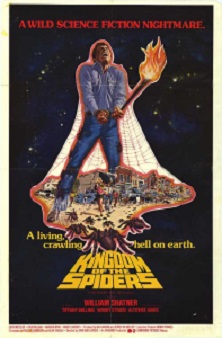 Don’t let the Promethean poster mislead. There’s nothing epic, otherworldly or sci fi about this one….what a tangled web we weave*. 1977’s Kingdom of the Spiders is actually a preachy creature feature.

The legendary William Shatner is an Arizona veterinarian known as “Rack.” (Probably more apropos now since he sports moobs.)

Rack** is called by a local, Mr. Colby (played by ex Rams football star and Spartacus legend Woody Strode), about a sick calf. However, we soon find out Rack is in over his toupee as unlike the usual ailment that will befall cattle — foot and mouth, mad cow disease — it seems this one was taken down by spider venom, and he’s not quite sure what to do about it.

Enter an entomologist, or…um… arachnologist. Yes, spiders are technically not insects, but arachnids. Either way, the arachnologist here is played by the leggy Tiffany Bolling, speaking of legs.

As local bovine start dropping like flies, we find out that the culprit is DDT, and that’s made the spiders go nuts. And these are not just any spiders. Big, hairy tarantulas. 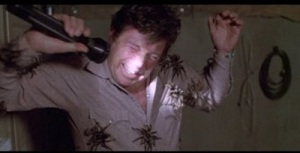 Soon, the authorities are on the case and residents are barricading themselves indoors and stomping the living heck out of the icky creatures.

Nice to see another taxonomy to add to our ‘nature run amok’ laundry list.

Add a combined one star for the ludicrous sight of Shat in a cowboy hat, as well as the rockabilly theme, Peaceful Verde Valley warbled by Memphis rockabilly singer Dorsey Burnette.

**This nickname is because of his prowess with a billiard cue. However, that could be misleading; he could lose so quickly that he needs to constantly rack balls to start a new game.

2 thoughts on “Kingdom of the Spiders”