Ultimately though, the less said about this cheap, silly salmonella of a cottage revenge flick the better. Especially as it annoyingly employs the found footage conceit, taking advantage of the nascent 90s video camera technology of the time.

Luther and Peter Paul Fate are menacing blonde brothers. The older of the two strong-arms the Of Mice and Men Lennie-type into doing his bidding. This includes assault and murder — but also more mundane things like getting him to do family cheers and clapping/stomping harmonica-based theme songs. You can recreate this yourself at home with the sea shanty-esque “We are the brothers Fate…”

Kill, Kill, Overkill spurred, of all things, some heavy-duty Googling based on Luther’s sartorial choices (picture Brock Lesnar’s gone-to-seed older brother in a trench coat held together with duct tape, plus some flip-up shades).

The latter led to, of all things, research into the forgettable Bill Cosby sitcom creation A Different World, where Dwayne Wayne, a hipster doofus attending a historically black college, brought these sun-glass accessories to the masses. According to a Mental Floss piece 14 Things You Might Not Know about A Different World, the show’s producer saw David Bowie guitarist Carlos Alomar wearing them in concert…and the rest…as this says…is a very minor stylistic choice in pop culture history. 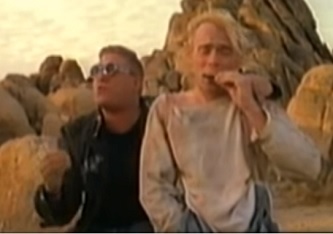 This may be a bit of a diversion, but really, there’s not much else to say about Kill, Kill, Overkill other than to point out a few clothing choices.

One of the college co-eds sports what looks like a diaper cinched by an empire waist (That’s pronounced “om-peer” — thanks What Not to Wear for adding the term to this reviewer’s hardly robust knowledge of fashion). Also, this very same college co-ed strips down to a bikini when her friend’s car breaks down en route to the cottage in the woods in order to facilitate a successful hitchhike (unbelievably, numerous cars pass without taking notice).

If nothing else, worth watching for the sartorial splendor. And there really is nothing else.