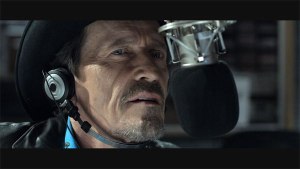 He’s a gnarly shock jock clearly dealing as much with personal demons as he is with this not exactly top-flight gig, where the “eyes in the sky” traffic report is actually being done by a terrestrially-bound guy in a car.

Driving into work for the morning show, he’s startled by a strange and scary encounter with a woman on the road in the midst of a snowdrift, who then disappears into the darkness. Because he inhabits the world of talk radio (the subject matter that is, not the 1987 Pulitzer Prize-nominated play and cool thriller Talk Radio written by Eric Bogosian) the odd roadside interaction becomes call-in fodder: During what circumstances can you justify a call to 911? Is the service ever abused? Where would that situation fit in?

Callers drone on while The New Guy works out show kinks with his two young producers, i.e.  how to cut to breaking news, “weather on the 1s” and all the other tedious talk radio conventions that have made the medium lose ground to podcasting.

Chat radio is often the target of broadsides by the political cognoscenti for being angry and reactionary — often true — but hosts also often have a better sense of what’s happening on main street than their critics.

And unlike dinnertime news anchors, radio hosts are more likely to be thrown into the fray when breaking news happens; to wit, the chilling turn The Howard Stern show took after planes hit the World Trade Center.

Here, Grant Mazzy starts getting call-in updates about an apparent disturbance outside the office of one Dr. Mendez, where large groups are gathering and acting strangely. The shock jock suddenly finds himself going live about the matter with the BBC.

After reports of a possible virus, the radio station, a place people turned to before Twitter in emergencies, is quarantined.

Pontypool is incredibly polarizing. A few attention span-deficient critics have bemoaned not seeing as much as they would’ve liked, when in reality the film is much more War of the Worlds than the world created by the likes of Romero. And that’s not a bad thing. Not every contagion film requires squibs, barbed wire fences and shotguns.

The horror here is quietly intimate, much like the relationship between a radio station and a listener. 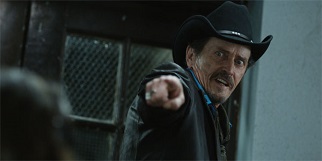 And horror critics routinely deride the sameness of so many of its conventions, something absolutely impossible to do here with the breathtakingly original, if not entirely effective, denouement (which takes on special resonance for Canadian viewers).

Director Bruce McDonald is a cool dude, and a prominent local talent. We first got wind of his work via Hard Core Logo, a mock-doc that caught Tarantino’s attention (he bought distribution rights stateside). We’re particularly excited about an upcoming project he’s working on (details of which we cannot divulge, as much as we’d like to).

Pontypool is as good a place as any to become acquainted with McDonald’s work.