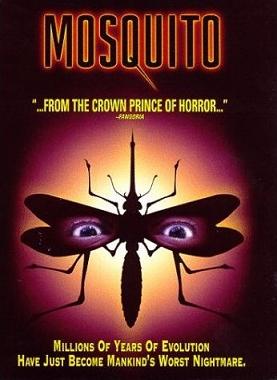 The film launches with a crash: an alien craft careens toward earth, killing its occupant, who’s then eaten by earth-bound blood-suckers.

Space DNA makes the bugs mutate to a meter in length, and suddenly cottage country has become a war zone of giant, attack-mosquitoes.

The human survivalists are Ray, channeling his inner McClane and strutting about in a wife-beater, two parks workers Megan and Hendricks, and stoic meteorologist Dr. Parks who cuts a “Cutty” Wise figure, resembling that character from The Wire.

In the backwoods, extra tension is created by a group of violent robbers on the lam, led by Earl (Texas Chainsaw Massacre icon Gunnar Hansen).

They find bodies strewn about, and after battling each other, the disparate groups are forced to eventually come together for a common purpose: “It’s not a WHO we’re dealing with, it’s a WHAT.”

The “what” in question are wonderfully-rendered practical effect mosquitoes, and the film throws in not-so-wonderful 2-D Birdemic-type effects for good measure. 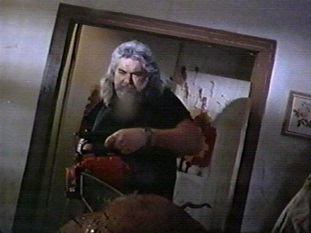 Soon, the remaining survivors are holed up in a drain pipe and then a house, a la Night of the Living Dead, barricading  themselves in to fend off the marauding bugs. Perhaps inevitably, Earl says re: a chainsaw he finds in the basement: “I haven’t handled one of these babies in 20 years.”

There’s a spirited RV chase and some biting lines too like “only the females suck blood.” “That figures!” There are also some really neat proboscis deaths (a proboscis is the elongated feeding tube of these creatures) including one nude cutie poked in the bum in her tent.

Not as good as Infestation or The Nest, Mosquito is still worth your time.

Don’t go in the woods indeed.

[If you’re interested in nature run amok movies, check out our podcast discussion with Mike Mayo, author of The Horror Show Guide]