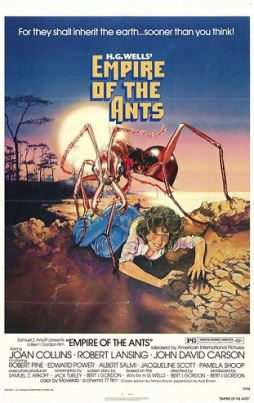 When radioactive waste containers are dumped into the open ocean, it spells trouble. Soon, one washes up on a Florida beach.

In Empire of the Ants, real estate developers are checking out some peninsular beachfront property (this being Florida, the state that gave us the phrase “If you believe that one, then I have some swampland in Florida to sell you”). And they soon find out things aren’t what they seem, both when it comes to real estate investment and…well, their very survival.

Joan Collins is Marilyn, who sports amazing gaucho pants and is a cutthroat real estate developer selling Dreamland Shores, a development that “sells itself.”

Everything is “first come, first serve” and there are signs hilariously depicting FUTURE TENNIS COURT and FUTURE POOL AREA.

We soon get compound eye insect POV and realize the investors, who are being shuttled about on a little tram, are not alone.

The area, of course, has “fascinating wildlife.” There are 100 bird species there according to Marilyn, but as the voice-over intones in the opening credits, “there are 15,000 species of ants.” 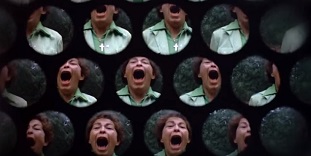 One of the prospective buyers, Thomas,  tells wife Mary that “most people are dishonest” as he finds some of the plumbing not up to code.

Soon, there’s a loud buzzing sound and the husband is defending his life quite unsuccessfully with a piece of PVC pipe against an army of ants.

And the buzzing is getting louder and louder, so much so that the tour group can barely hear Joan Collins barking through her bull horn.

Soon, the group’s under attack along with their boat, making escape damn nigh impossible.

All that’s left is to utter, “Why is this happening?” “Where did they come from?” and least helpfully, “We’re never going to get outta here.”