More people want Allegra Geller dead than even Anita Sarkeesian. eXistenZ is the reality-bending game she developed that is taking the world by storm.

When Geller (Jennifer Jason Leigh) survives a failed assassination attempt at a focus group test launch of her new game, one with “just enough free will to make it interesting,” she’s shown to safety by a security guard, Ted Pikul (Jude Law).

Do we even have free will, or are we subjects of what Sartre called “the bottomless well of excuses” that is determinism? Philosopher Daniel Dennett says the key to free will is understanding that it’s a biological-level phenomenon. No doubt David Cronenberg would agree.

His conception of gaming is our nervous system directly engaging the game architecture via umbilical bio-ports. Back when David conceived of this film, virtual reality was all the rage and it wasn’t that much of a leap to envision a richly immersive, tactical experience “inside our heads,” rather than interfacing with a screen that would make the real/unreal dynamic that much more difficult to discern. Now that 2016 is apparently the year virtual reality gaming will take off (according to The Guardian and others), Cronenberg’s conception of gaming has, in a way, been vindicated. Unlike the VHS tapes of Videodrome usurped by all kinds of technology since, this unreal world is going to become even more real indeed. 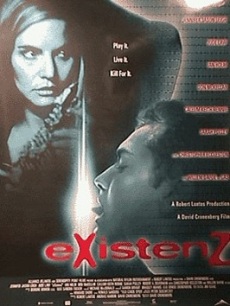 This site’s reviewers are not hard-core gamers, that part of the 50% of North American households who own gaming consoles. The ambivalence might arise from the fact that, as artistic as games can be, they’re cutting into the time users are spending watching movies (according to data from the Entertainment Software Association).

It’ll be hard NOT to be enticed into becoming a gamer, with Cronenberg’s vision here coupled with the expanded possibilities of the technology.

In eXistenZ, Jude Law’s character Pikul has a phobia about “being penetrated surgically.” He’s given a bio-port gaming implantation “off the grid,” by an unhinged mechanic played by Willem Dafoe.

And then Pikul’s effectively left the real world behind, playing Geller’s game along with her, fighting for the Reality Underground against the gaming establishment in a virtual world dominated by mutant amphibians and slightly off characters (very accurately depicted; the video game industry meanwhile, is making game characters whose movements are becoming more fluid and indistinguishable from actors).

It’s a terrific idea, a companion piece to A Nightmare on Elm Street: an unreal dreamscape from which there’s seemingly no escape.

And perhaps advances in gaming development will work as a feedback loop for the movie industry and we’ll get a truly immersive horror experience, regardless of the medium. We hope we’re alive to see it, or at the very least, our memories are uploaded to some server permanence.