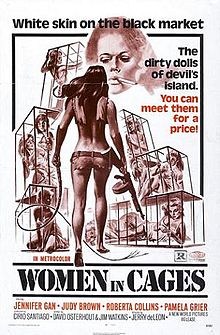 A cockfight sets the tone and tips off its location: exploitation country, actually the Philippines where lots of this crap was filmed because it was cheap and offered an exotic backdrop.

Women in Cages isn’t a metaphor for some underground art-house feminist production. It’s antithetical to that in every possible way, but we’ll give it this much: the title delivers exactly on its modest promise and it’s probably a helluva lot more entertaining!

There are women, they’re in cages and they aren’t happy.

Self-described “player” Rudy, whose idea of a good date is that aforementioned cockfight (second only to Travis Bickle’s Taxi Driver first date as “worst date location ever) gets his California girlfriend Karen to take the rap for him over a brick of heroin.

Rudy promises to get his lawyers on the case ASAP to spring her and tells her to keep her mouth shut. Problem is, that call never comes and she gets 10 years of hard labor at the Garcel Del Inferno (we don’t know any Tagalog, but this seems ominous in any language).

Because this is a WiP feature, her fellow inmates are all attractive and are hosed down in glorious fashion.

Pam Grier is “Alabama,” a guard who has it in for her fellow Americans (especially Dixie ones) over slavery payback. She demands that everyone incarcerated refer to her as “Chief Matron.” Much like in The Big Doll House (Grier’s big break), she has a penchant for gingers and she’s got got good taste in women too, bringing back a few to her office for some R&R. [CHECK OUT OUR CHAT ABOUT THE BIG DOLL HOUSE ON THE PODCAST]

Inmates at Garcel Del Inferno are told to “watch out for the playpen,” a torture dungeon featuring a guillotine, a Catherine Wheel, and a noose, prompting the question, exactly what kind of penal institution is this?

This won’t prevent recidivism at all.

Actually, the warden here runs a pretty tight ship. Escapees who decide to make a break for it out on work detail in the sugarcane fields are hunted down by criminal trackers for whom bringing back anyone alive isn’t exactly a key concern.

True to WiP form, there’s a resident junkie, “Stuck,” (Stukowski) a blonde who’s approached by an outside goon to commit murder and naturally, shower scenes, whippings and violence!

Pick up The Women in Cages Collection over at Shout! Factory.