Here’s something you don’t see every day in your run-of-the-mill quotidian 80s slasher: a brawl on a Tilt-A-Whirl.

Bloody New Year features yuppie vacationers taking in a carnival in Wales, and taking on carny folk who’ve spun their lady friend for more revolutions than she cared for. Two friends, one of whom has a sweater tied around his neck (the polo-inspired attire favored by rich folk one can readily resent in horror) leap to her defense. The carnies give chase. Soon, our heroes are rescued by their friends in a van and everything seems OK enough to be able to resume their summer furlough.

The party of six drive down to the beach and head out in a sailboat. Unfortunately, their craft starts to take on water and they’re forced to abandon ship and they find themselves castaways on a nearby island.

They’re met with DANGER: KEEP OUT signs, strange skulls and discordant runs up and down a piano keyboard. Be afraid, be very very afraid! 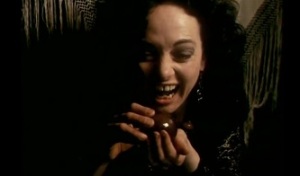 The carnival soothsayer predicts bad things will befall this group.

They happen upon the Grand Island Hotel, which, it should be said, seems neither grand nor to be a fully functioning hotel. It’s decked out in Christmas / New Year’s decorations despite it being the middle of summer. And the friends have it all to themselves. What could possibly go wrong?

There are some choice lines like: “I wonder what it’s like, doing it on a snooker table?” (The boyfriend doesn’t even respond with “I’ll break!”) and “We can’t go anywhere without a boat.” (Stands to reason as it’s an island.)

There happens to be a movie showing at the hotel’s theatre: the 1958 British sci fi film Fiend without a Face. But there’s something odd about the screen and the projection equipment seems to be running itself.

Bloody New Year is an off-kilter mélange of Twilight Zone and Demons and even has elements of Swamp Thing and Poltergeist.

And for a movie titled Bloody New Year, there’s not much in the way of blood (and it’s set in the middle of summer, but that doesn’t stop us from tagging it as a Holiday Movie).