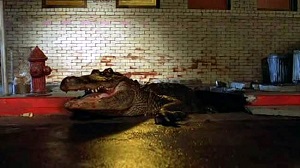 “He was mumbling some garbage about alligators in the sewer.”

Doesn’t this hospital honour patient confidentiality, especially in the case of a prominent police detective?

Anyway, a prying reporter manages to get that juicy tidbit from a nurse as we discover that a giant reptile is roaming the plumbing of a large Missouri city and cops are on the hunt for it.

It all begins with a Midwestern kid on vacation with her family in Florida, who goes to a gator farm and despite the handler nearly getting eaten alive, is inspired to purchase a baby alligator to take home with her. When she gets back to Missouri, little “Ramón” is flushed down the toilet by a strict father and in this nod to urban legends, grows and grows and grows amidst subterranean filth, methane and most importantly for a poikilothermic creature, a complete absence of sunlight (not to worry, a herpetologist weighs on in cold-blooded creatures trying to make do in the cold confines of a drainpipe). 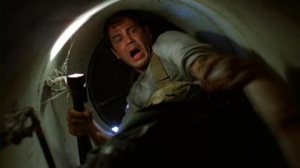 Because this is a John Sayles movie (he wrote Piranha), there is some anti-corporate subtext. So, we get a pharmaceutical company subplot involving a degenerate pet store owner who’s stealing neighbourhood cats and dogs and selling them as lab specimens and hormones being flushed down the sewer.

Called in to investigate, is Robert Forster (the “r” was added because there was already a Robert Foster in SAG), best-known as the sad-sack star of Jackie Brown. He’s Detective Harrison, who along with the chief (played by Michael Gazzo, “Frank” from Godfather II) pursues different leads and consults with scientists to figure out what’s going on.

Meanwhile, they’re dogged by the prying reporter as Detective Harrison’s got lots of baggage (previous partners have been killed in the line of duty and that bad mojo continues with giant scaly creatures)

Everything’s very Old Man and the Sea / Moby Dick / Jaws and there’s even a doff of the genre cap to Jaws with a Big Game Hunter conscripted to track the 15-foot beast.

Interestingly, in the original script Sayles envisioned a brewery leak and a gator feasting on malted barley as its growth catalyst, rather than hormones that made their way into the pipes.