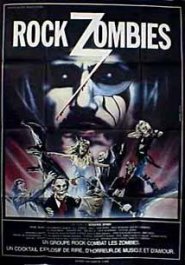 Ah, 1985…a heady time of hair bands, cock rock and incredible horror films such as Re-Animator, Day of the Dead, Phenomena and Return of the Living Dead. Hard Rock Zombies from that same vintage year, alas, is not one of them. It’s barely a movie really. But it is bizarrely entertaining and does feature more than it’s share of cocking and rocking.

The film begins as any other rock/horror hybrid does: with an extended scene of people driving as generic metal blares on the soundtrack (see Rock ‘N Roll Nightmare) Two generic 80s dudes are cruisin’ down the highway when they spot a comely hitchhiking lass who looks like a reject from an era appropriate ZZ Top video (pronounced “Zed Zed Top” here in Canada.) They pick her up and soon engage in a little dipping of the skinny kind. Unbeknownst to the travelers, there’s a strange man taking photographs accompanied by two little people — one wearing an eye-patch and the other with the face of a gargoyle. The girl must be doing something naughty to the boys underwater as the lake starts to gurgle with blood. She then lops off one’s hand and we’re off to a great start.

Cut to a group playing a song called “Shake It Out” in a small club. While the mustachioed lead singer/bassist Jessie plays a bass line suspiciously similar to “Big Bottom” by Spinal Tap, the rest of the band engages in every 80s rock band cliché you can think of (shirtless drummer double-twirling sticks, choreographed rocking, tight pants and studded sleeveless shirts etc.) Not long after, we’re in the dressing room where the entire band is inexplicably lounging about in extremely skimpy Speedos (probably included since E.J. Curcio who plays Jessie was also a Chippendale’s dancer.)

The band needs to head to the next town for the requisite “gig-of-a-lifetime” where the obligatory major league A&R man will be in attendance. The town is called Grand Guignol which does not sound promising, and Jessie is also warned by an odd girl named Cassie not to enter city limits. Why an A&R guy would venture to this podunk, shithole of a town rather than a major market such as New York or L.A. remains a mystery, yet the road does beckon and as Bob Seger then Metallica said, turn the page. 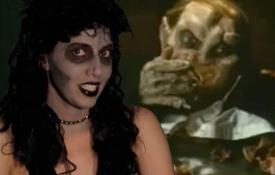 In the van, Jessie plucks out a dirge-like number meant to raise the dead that he found “in a book.”  Remember that — it’s important for later.

They spy Legs hitchhiking on the side of the road and pick her up. She promptly invites the band to her place to stay and rehearse which they naturally take her up on. Turns out she lives in a mansion populated by the weirdest denizens this side of Spider Baby. There’s the aforementioned photographer and the two dwarves as well as the animated severed hand from the opening scene, a geek who cuts the heads off chickens, a dog-faced grandmother in a wheelchair, and a mother and father who turn out to be the presumed dead but very-much alive Eva Braun and Adolph Hitler!

Then, as if in a scene from A Hard Day’s Night were it directed by Bret Michaels, we’re treated to a nutty musical montage featuring our band engaging in, among other things, Russian dancing, miming, skateboarding, heavy-metal hijinks and mugging for the camera galore, all to disparaging looks from the locals and town sheriff. This leads to this inspired exchange.

Sherriff: Get the Fuck out of town, you little pecker!
Jesse: But we got a concert tomorrow.
Sherriff: You got Shit tomorrow, Sonny!

The band is then arrested and thrown into a barn! 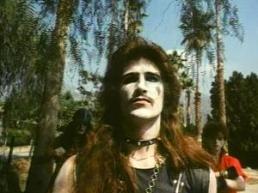 Town council also votes to ban all forms of Rocking and or Rolling, but before the film turns into a metal version of Footloose, it thankfully remembers it’s a horror film. The band is bailed out by the video vixen. Cut to her in a gratuitous shower scene. One of the band members decides to help her scrub her back and is promptly dispatched in a cute homage to Psycho. Soon, all sorts of hell breaks lose and each member of the band goes to that great gig in the sky. However, before Jesse shuffles off this mortal coil, he gives Cassie (for whom he wrote a KISS / Shandi-esque number called “Cassie’s Song”) a tape and urges her to play it. It’s the aforementioned dead-raising dirge. She plays it by their graves and the band is soon arisen to have their revenge!

Hard Rock Zombies is spectacularly nuts. The film was meant to be a 20 minute short but was dragged kicking and screaming to feature length. As such, like an extended drum solo, there’s lots of unnecessary padding. But it’s not just filler with no killer. It’s an entertaining mess which culminates in all the zombified characters (pretty much everyone in the film) dancing and rocking out together. It’s also a nice remnant of an era when people took themselves just a little less seriously and amps went all the way up to 11.