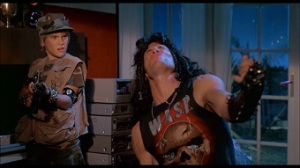 On our latest podcasts, we look at TerrorVision, as well as influential low budget cinema.

In TerrorVision, a family’s new satellite television system starts receiving signals from another planet and picks up a giant, bloated alien with an appetite for garbage.

The movie was written and directed by the sound recording guy from The Texas Chainsaw Massacre, which was a bit surprising given the subject matter.

In the other podcast, movies that inspired our love of low budget cinema (Part I):

Eating Raoul is about a couple (The Blands) who finances their dream restaurant by luring swingers over to their apartment and whacking them over the head with a frying pan to steal their money.

Film Threat says the flick, “Nicely lays out capitalism on the chopping block. In an obsessively consumptive culture like America’s, the only way for a common couple to strive is through killing, then consuming.” 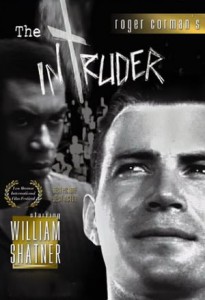 The Intruder, AKA, I Hate Your Guts, casts Captain Kirk William Shatner as a cross-burning bigot, and was the first Roger Corman movie that lost money. Corman said about The Intruder, “[it] remains to this day, the greatest disappointment of my career.”

In the book, Son of the 100 Best Movies You’ve Never Seen, Richard Crouse says that according to legend, Corman lay some of the blame of the movie’s poor box office take at the feet of pre-Trek Shatner.

Dolemite is a supposed “comedy,” featuring the self-proclaimed “Godfather of Rap,” Rudy Ray Moore (RIP) who once proclaimed, “When it comes to rappin’, I was through with it before they knew what to do with it.”

With a budget of $100,000, Dolemite looks far cheaper and features boom mics and some of the worst fight scenes committed to film.