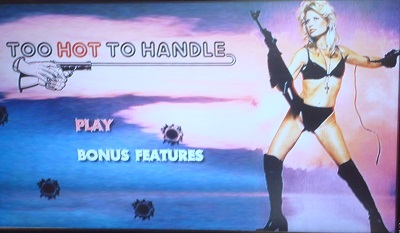 Too Hot to Handle, a 1977 Roger Corman production, also features a slew of international accents (Dutch, Floridian, Filipino, Israeli) and is set in beautiful Manila, making great use of local beaches and the city’s Chinatown.

Cheri Caffaro, best-known for the sleazy Ginger trilogy, plays Samantha Fox, not to be confused with the East London glamour girl and 80s dance-diva responsible for Touch Me (I Want Your Body).

Fox is a contract killer who is hunted by and then promptly seduces, detective Domingo De La Torres (Aharon Ipalé, a long-time character actor best known for playing the pharaoh in the Mummy movies). 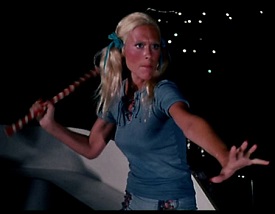 Along the way, she doffs her clothes at a moment’s notices, takes out street toughs with slow-moving martial arts, hits nightclubs and lounges about with drinks, a kind of exploitation James Bond, but maybe with a license to kill time.

A bikini-clad Dexter, she only dispatches gangsters (one by plastic bag asphyxiation and S&M foreplay), pimps and slave-traders. She does this (we’re not exactly sure how as a solo operation) with impeccable research, guile and disguises including some not-very-convincing yellow-face and an inability to speak Tagalog, which would’ve been helpful.

Detective De La Torres has enough chest hair to replicate a bearskin rug and he’s of course reluctant to bust the blonde Batman, who is seemingly a sophisticate, great in the sack, but is also turned on by cockfighting (!).

Strange cuts, splits screens, car chases, a machine-gun shootout on a baseball diamond (sure!)  and a fantastic score propel this along to a compelling conclusion aboard a yacht.