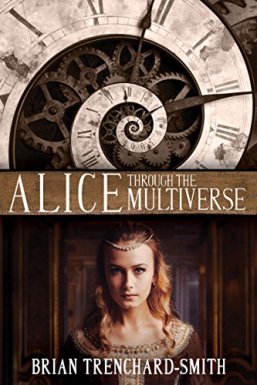 When we gaze into space, we can see the afterglow of the Big Bang, some 14 billion years back in time to the creation of the known universe. In the theory of “eternal inflation,” though, some parts of the universe didn’t end, creating alternate, or multiple universes (multiverses), infinite in number and perhaps even obeying different laws of physics from the ones we’re familiar with.

In Brian Trenchard-Smith’s Alice Through the Multiverse, protagonist Alice, born in Tudor England, finds herself “in a strange place, interrupted by fragments of a life she had known. And with each waking, a contradiction.”

This place? A psychiatric hospital, present day…where “she had not died, or at least, she had no memory of death…[yet] here she was in another world. Certainly not Heaven, nor did this seem the molten pits of Hell.”

Faithful readers of our site will recognize the name, Brian Trenchard-Smith. He’s the English-Australian film/TV director, producer, writer (and now novelist) who directed the thoroughly mesmerizing Stunt Rock, and the crack action flicks, Day of the Panther and Strike of the Panther, the dystopian/survivalist, Turkey Shoot, and two installments of the Leprechaun series. The beginning of Alice came to him in a dream in 2003:

All I could remember next morning were a few images. A riot overwhelms a medieval execution… A young girl flees through the forest in a blinding thunderstorm… The girl faints… She wakes up in a 21st Century psychiatric institution…

From a narrative standpoint, infinite universes provide novelists with infinite narratives (the fractal on the book’s cover is no accident. These are infinitely complex abstract objects that simulate naturally occurring phenomena). Here, Trenchard-Smith focuses on two: an attending physician who kidnaps the girl, and secret agents who then pursue the duo.

Writers of historical fiction need to get every period detail correct. Even more challenging? Switching between time and place, as the author deftly does here, from posh West London to 16th century Tower Hill.

The book is available on Amazon / Kindle and interested readers can take a look at this short trailer.

One thought on “Alice Through the Multiverse”