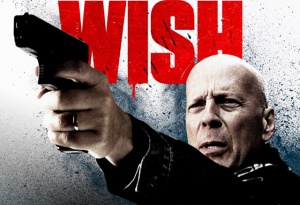 [Check out our DEATH WISH PODCAST if you like.]

Miles Davis said “Time isn’t the main thing, it’s the only thing.” Another way to put it is of course, timing is everything. And given that we’re so close to what just transpired tragically at Stoneman Douglas High School in Florida…there are some who’d say that maybe now is not the right time for a new Death Wish movie.

Those people would be wrong, as instead of focusing on the hair-trigger paranoia and ugly racial undercurrents of the 1974 classic or delving too much into polarizing gun politics, director Eli Roth gives us an at-times mordantly funny, straight-up dumb-dumb action movie that’s a surprisingly worthy entry in the “urban scum” canon.

In the original Death Wish, Bronson was an architect, one of the greatest depictions of the profession ever (other than George Costanza’s fantasy-land version on Seinfeld). And it was a great conceit: a guy whose job it is to bring order to chaos, going wholly chaotic when he turns vigilante.

So Paul Kersey’s back for a new generation, with Bruce Willis. Except that this time, he’s a doctor so that Hippocratic dictum, Primum non nocere, or “first do no harm” is inverted and PK goes all Dr Kevorkian on the South Side of Chicago with nary a community organizer in sight. 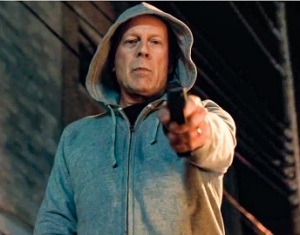 The film flies out of the gate with a harrowing depiction of a busy ER where PK is the trauma surgeon, tending to yet another in a spate of weekend shootings for which Chi-Town has become renowned. Soon, as we all know, his immediate family falls victim and it’s up to the doc to set things straight.

There’s an audacious split-screen of the surgeon stapling together a wound at his day job, and dis-assembling his piece at his night job, set to the strains of AC/DC’s Back in Black. Kirby Bliss Blanton (The Green Inferno) does a scene-stealing turn as Bethany, a gun shop sales assistant and Vincent D’Onofrio is fun as Kersey’s sad-sack ever-broke ex-con brother.

The Windy City has never looked grittier. There are little nods to CS Lewis and Milton Friedman (after all, he’s part of the Chicago School and all that) and the performances are largely solid.

And there’s a scene with a bowling ball that’s wildly over-the-top. Death Wish is as moronic as it is hugely entertaining.