Like Parzival, we “travel with Fortune’s instruction,” a quest to watch as many random genre films as humanly possible. In the early days, this meant tracking down as many “massacre” movies as time allowed. Sorority House Massacre is one such film, if not exactly the holy grail of 80s slashers.

With a cover to entice teen boys everywhere, Sorority is on the surface, a run-of-the-mill era slasher with, well, lots of slashing and a knife pointed at a boob (not belonging to anyone actually appearing in the film, but that’s incidental).

This is a Roger Corman co-production, a rarity in that it was directed by a woman, Carol Frank (also responsible for assisting Deborah Brock, the director of The Slumber Party Massacre, which dropped its definite article for its incredibly inane and hilarious sequel. Please see our list of 10 Spring Break Horror Movies).

Sorority sister Beth is rattled by flashbacks to childhood trauma — flashbacks along with cheesy prologues being practically compulsory in the period.

In a dream like state, Beth encounters three chimerical figures, one of whom warns her to “be careful” vis-a-vis the sorority house in question.

Luckily, in the real world, people heed advice from the likes of financial planners, doctors, and personal trainers. In horror, regardless of the source, advice of all kinds is routinely ignored.

Set close to the Memorial Day weekend, this was likely nearly called Memorial Day Massacre, but maybe holiday horrors have a shorter shelf-life? Can’t see anyone flocking to a Santa slasher well into February. Fun fact: in the inspired hicksploitation send-up Tucker and Dale vs Evil, there is actually a reference to a “Memorial Day massacre.” 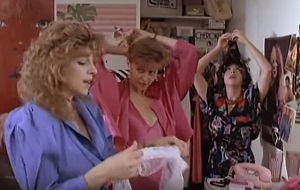 Anyway, Sorority House Massacre is not all about stripping down to skivvies (Though there’s a trying-on-dresses/topless synth montage): These girls go to class too.

Linear Algebra? Introduction to Materials Science? HELL NO! Rather, Anthropology and Psychology classes about deja vu and clairvoyance so Beth can have nightmarish visions of knives going through her desk.

To further her PTSD, there’s an obnoxious frat guy telling cigarette lighter-lit tales of pick-axe horrors. The account: a brother who murdered his entire family in THAT VERY SORORITY HOUSE.

Against the backdrop of an escaped lunatic on the loose, there’s fun period dialogue like “God Tracy, get sensitive!” and “I can pitch a tent”-type double- entendres.

That’s enough of a background you’ll need to get a sense of this slasher, which draws heavily on Halloween. 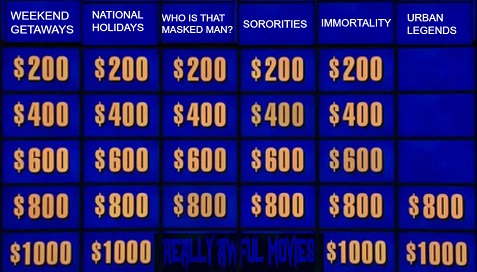