Dwarfed in number by all the Christmas-themed horrors, there are still enough horror movies set on Valentine’s Day to generate an indulgent, satisfying list.

Valentine’s Day has its origins in fertility rituals. And as Freud showed us, sex and death are linked (should the two happen simultaneously, there are worse ways to go). Sex and death are certainly linked in horror, as the former usually precedes the latter. Staying fully clothed is more closely correlated with surviving to the closing credits than even possessing a weapon.

St Valentine of Rome is the patron saint of love, affianced couples and young people. According to some accounts, he was beaten to death and beheaded. Guess John Lennon was wrong about love being all you need. In honor of the good saint and the day, we thought we’d beatify 7 Valentine’s Day Horror Movies.

1. Tales from the Crypt (Poetic Justice)

“You were mean, so cruel, right from the start. Now you have really no…HEART!”

We launch our list with a segment from Tales from the Crypt, that five-part Brit horror anthology.

In “Poetic Justice,” a couple of ruthless snobs torment and harass their widower garbage man neighbor into committing suicide. Not very neighborly at all.

From beyond the grave, the man exacts revenge with a special Valentine’s Day note and a gift.

“A Valentine from Harold?”

Hospital Massacre was originally titled X-Ray, Ward 13 and Be My Valentine, Or Else…The “or else” comes in the first scene when poor young Harold is rebuffed, then mocked by his paramour Susan as well as her friend David. Harold is none too pleased and murders David by way of a hat-rack, in one of the more unusual killings ever in an 80s horror.

Flash forward a decade and Susan is going for a routine checkup at a hospital because hey, this movie isn’t called Hospital Massacre because there are countless shots of people staring forlornly into the desert.

There, a masked medic is butchering nurses, patients, orderlies…basically violating every facet of the Hippocratic oath. CHECK OUT OUR DISCUSSION OF HOSPITAL MASSACRE ON THE REALLY AWFUL MOVIES PODCAST.

Two Canadian horrors made it big in the mid 70s/early80s. And both capitalized on holidays. Black Christmas launched POV horrors before John Carpenter’s Halloween and in 1981, My Bloody Valentine showed us that whatever was in the air, it wasn’t love.

The Maritime town of Valentine’s Bluff is prepping for a clandestine Valentine’s Day dance (much like The Prowler, things were cancelled due to unfortunate circumstances). However the show must go on.

Here an explosion blamed on management claimed the lives of some miners, save for one. This miner, Harry Warden, survived down in the mine-shaft by cannibalizing his comrades. Back on terra firma, he warned the residents not to hold a dance on this tragic date. But did they listen? And is security at the institution where he’s being held robust?

A bona fide classic, and one of the best slashers of the 80s, as long as it’s viewed in its uncut form. 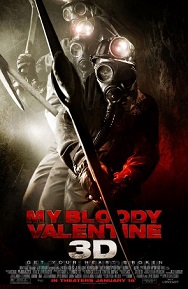 In the 2009 reboot, the heir to the Hanniger mine fortune returns from the big city after a mining accident claimed the lives of some miners, save for one Harry Warden.

Residents of Harmony, Pennsylvania are not thrilled as they figure this young upstart is just going to sell off the company’s assets and put them all out of work. They also cite his company’s negligence as the reason for the mishap.

Soon though, they have bigger fish to fry than concerns over local industry.

At the institute where Warden’s convalescing, there’s been a big hospital massacre. The sheriff finds the heart of a nurse in a candy box and Harry is on the loose to knock off locals with his pick-axe in glorious, in-your-face fashion.

If you’re a fan of the MBV reboot, check out our My Bloody Valentine podcast.

Based on a novel of the same name by Tom Savage, Valentine follows the exploits of a bunch of kids on Valentine’s Day, 1988.

Shitty prologue alert: Geek Jeremy Melton is being shot down by every girl in school, until the fat girl Dorothy says she’ll go to the dance with him. They end up making out under the bleachers and when they’re discovered by the cool kids, Dorothy realizes she’s higher on the pecking order than Jeremy and claims he attacked her. The boys in the group kick the tar out of him and strip him down.

Flash forward years later and the cool kids are all in college.

Suddenly, they start receiving  “Roses are red, Violets are blue, They’ll need dental records to identify you”, V-Day cards. Who could the perp be? If you guessed correctly in Hospital Massacre, you get a prize (but be forewarned: it’s in a heart-shaped box).

The previous film, Valentine, was directed by Jamie Blanks who was responsible for Urban Legend. Now, the killer with a hook for hand is the classic urban legend. Put aside for a moment just how tough it is drive cars, open doors, windows, and all the other skills you might need to track down your victims (and how the hell do you go to the bathroom?)

Anyway, in the 1999 film Lovers Lane, a psychopath goes after amorous victims. Nicknamed “The Hook,” he’s captured and incarcerated. But as we all know, mental institutions don’t have an air-tight escape record comparable to Alcatraz (an excellent episode of Mythbusters recreates the one successful attempt). Suddenly, there’s a spike in hook-for-a-hand-related deaths in town. Not the worst film based on an urban legend (that would be Alligator 2: The Mutation) it’s also far from the best (Alligator).

Picnic at Hanging Rock is more of a mystery/thriller but New York Times critic Vincent Camby did point out in his review: “Horror…may be a warm sunny day.”

Whatever genre envelope you’d like to stuff it into, the quirky Peter Weir-directed caper helped put Aussie film on the map.

On Valentine’s Day, 1900, a group of girls and staff from Appleyard College, a girl’s boarding school in Victoria, Australia, take a trip to Hanging Rock, a volcanic geological formation 500 feet tall.

After cards are opened and the Valentine’s Day cake is cut, a group of four girls go to climb and explore the rock. They fall into a slumber, and upon waking, one girl watches in horror as the other three wander trance-like into a recess in the rock face. She runs back in a panic and it’s later discovered that a teacher has also disappeared.

To quote Monty Python, “nobody expects the Spanish Inquisition.” This is a period piece nunsploitation about star-crossed lovers Esteban and Lucita. The latter’s father is so intent on keeping them separated, he locks her up in the Saint Valentine Convent. After the girl’s disappearance, fingers are pointed at Esteban and he must flee crazed inquisitors in this weird Italian curiosity.

The Silence of the Lambs was released on Valentine’s Day, 1991.

DON’T FORGET TO CHECK OUT THE REALLY AWFUL MOVIES PODCAST (New episodes every weekend) and our acclaimed book, DEATH BY UMBRELLA! The 100 Weirdest Horror Movie Weapons.