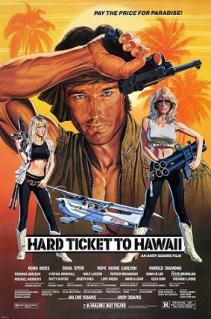 As a B-movie fanatic, the name Andy Sidaris was always on my radar. Here was a man who reveled in elements of cinema I love (copious nudity, cheesy action set pieces, gigantic guns and explosions, ludicrous plots and inane dialogue) and yet I had never sat down and watched one his films. That has all changed upon viewing the wonderful Hard Ticket to Hawaii, and now I can’t wait to delve into the rest of the man’s oeuvre.

The film wastes no time in establishing that we’re in…well, Hawaii (makes sense but I didn’t realize that obtaining a ticket to the 50th state was so difficult). But instead of leis and luaus, we’re treated to a set of utterly gratuitous D-cups in the first 2 minutes of the film’s run time, courtesy of a ludicrous hot tub sex scene between two DEA agents, the buxom Donna and himbo Rowdy.

Cut to two of Hawaii’s finest visiting a marijuana grow-op on a private island. The elderly cop is explaining the particulars of the trade to his young successor. With only a month to go before retirement, we know that the elderly cop will soon be shot to shit, and indeed, he and his young charge do not make it off the island fully intact. Expecting to find a small, family run operation, they instead stumble across a huge drug cartel with henchmen brandishing machine guns. The two get caught in a booby trap and are blown to bits. 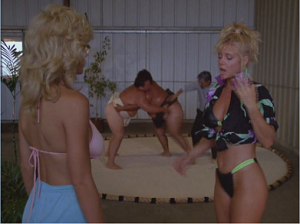 Over in Molokai, Donna and another blonde, Taryn, are working undercover for the DEA under the guise of pilots for Molokai Cargo. Their short shorts and teased hair make them look like they just stepped off the set of a Whitesnake video, and why would cargo pilots need to carry Nunchuks? Never mind. They’re conscripted to fly two honeymooners for a private excursion to an island, and to also deliver some crates, one of which contains an enormous virally-contaminated snake! And why wouldn’t the island be the very same one where the cartel holds it’s operations?

After dropping off the honeymooners, the girls come across a remote controlled helicopter which contains two boxes. They grab one box, but the other gets lost in a melee when the same two henchmen (one of whom has the same physiognomic characteristics of a mid-80s WWF jobber) attack them. The girls get away and convene at their apartment to figure out what happened. Naturally, their post-mortem is conducted in a Jacuzzi because, as Donna says, she does her best thinking there. And as we all know, nothing aides deep and strenuous thought better than being topless in a hot tub. The box is opened and is found to contain several diamonds. 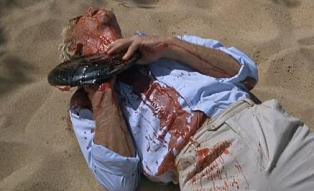 The diamonds belong to crime kingpin Seth Romero, a man whose French accent is so thick he makes Jean Claude Van Damme sound like Laurence Olivier. Naturally, he wants his diamonds back and sends two more hench (well, one man and one woman) to attack the buxom beauties in their home. The blondes turn the tables, and Donna actually manages to get off a shot which grazes Romero in the face. Realizing they’re in deep doo-doo, Taryn and Donna enlist the help of Rowdy and his ponytailed partner Jade to take down the evil drug lord.

Hard Ticket to Hawaii is the very definition of the word gratuitous. Besides the copious boobs, butts and sex, the film also features:

And yet, it is all that gratuitousness which makes Hard Ticket to Hawaii so endearing. The film also features inane lines of dialogue such as “If brains were bird shit, you’d have a clean cage.” and “She’s so dumb, she went home early to study for her pap test.” Simply put, Hard Ticket to Hawaii doesn’t take itself seriously for a second. It’s loud, dumb, ridiculous, and full of fun.

Loved every second of it!

4 thoughts on “Hard Ticket to Hawaii”