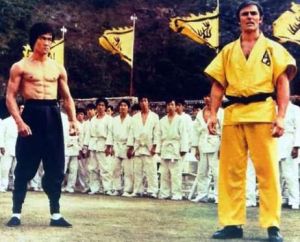 When a woman’s body washes up in the South China Sea, the death is pinned on the mysterious Mr. Han, an island recluse and cat-stroking villain with a prosthetic hand who could’ve stepped right out of a Bond film.

That this should be the casus belli for the hundreds of fatalities that ensue, is a little rich but hey…who needs plot when there are fists of fury?

British intel tries to get Lee (played by the redoubtable Bruce Lee) to infiltrate Han’s island, where to-the-death martial tournaments are frequently held.

Since there’s the obvious potential red herring large enough to be spotted from a helicopter, the film deals with it abruptly: Mr. Han doesn’t like guns! (He had a bad experience with them. Ergo, anyone’s frisked coming in and if they’re found packin’, they’re sent packing! So intel couldn’t just arm Lee to the tits and have him shoot the place to bits. Clear?

Instead, Lee uses his guile and his incredibly ass-kicking ability to get his hands on Han.

There’s a reason rappers Wu-Tang Clan “kicked rhymes like Jim Kelly” in Da Mystery of Chessboxin.’ Jim Kelly (Williams) is simply awesome and he’s along for the ride as a tournament combatant.

Also, b-movie greats Bolo Yeung (Bloodsport) and John Saxon (Cannibal Apocalypse and A Nightmare on Elm Street I and III) are on hand to compete in this tournament. Bolo folds up one of Han’s henchman like an accordion in one of cinema’s most memorable deaths.

When Han accuses Williams of breaking curfew as well as the bones of his faceless, inept security detail, we get the following:

Han: We are all ready to win, just as we are born knowing only life. It is defeat that you must learn to prepare for.
Williams: I don’t waste my time with it. When it comes, I won’t even notice.
Han: Oh? How so?
Williams: I’ll be too busy looking gooood.

A lean Bruce Lee’s acrobatic chop-socky beat-downs carry the day, but there’s no denying the charisma of Han (Shih Kien) and the coolness of his prosthetic weaponry.

5 thoughts on “Enter the Dragon”