Berkshire County is the feature film debut for Canadian director Audrey Cummings. The film had an extremely successful festival run and picked up many accolades, including Best Horror Feature at L.A’s Shreikfest and Best Actress at Toronto’s Blood in the Snow.

Berkshire County is both a home invasion and babysitter-in-peril flick – two sub-genres well-represented in horror – with films such as The Strangers, Ils (Them), You’re Next, and Funny Games representing the former and When a Stranger Calls, Halloween and The House of the Devil representing the latter. The middle portion of Berkshire County adheres to many of the tropes and formulas you’d expect out of these types of films, but the beginning of the film is original and the ending is an atypical, kick-ass punch in the gut.

As the credits roll, a rusted pork delivery truck is seen driving down a long deserted country road. Cut to a Halloween party where shy, self-conscious teen Kylie (Alysa King, in a commendable performance) is dressed as a rather ravishing Red Riding Hood. Her Big Bad Wolf arrives in the form of boxing-robe clad Marcus. He convinces reluctant Kylie to perform a sex act on him, and unbeknownst to her, films it.

Kylie is humiliated at school when she discovers that everyone has seen the video. She’s then assaulted  by Marcus’s ex-girlfriend and shamed by her classmates. Marcus even has the gall to ask her to talk to the principal so he doesn’t get expelled for uploading the salacious footage. Things aren’t any better at home as Kylie’s mother berates her for not standing up for herself. The adverse effects of social media and peer bullying are novel ways to render a character vulnerable and serve to further break down an already broken-down heroine. The audience cannot help but root for poor Kylie while eagerly awaiting her heroic, cathartic rebirth

It’s Halloween night and Kylie has a babysitting gig in a remote and expansive house located a couple hours away in Berkshire County. She drives up and meets her two young charges. However, on the way, she spies that rusted truck at the side of the road with someone wearing a wooden pig mask standing by ominously (shades of You’re Next.)

Her and the rugrats play hide and seek, she tells them a story, and then puts them to bed. Soon she gets a couple of unnerving phone calls followed by a series of loud bangs on the door. Outside is a little boy, also in a pig mask. Instead of telling the brat through the door that it’s too late for trick or treating, she instead opens the door and another, rather large masked man attempts to forcibly break in. 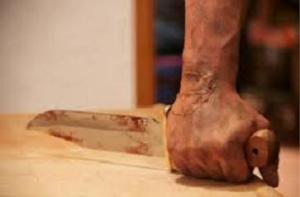 What follows is the usual cat-and-mouse game between the hunters (two adults and a child) and the hunted (Kylie and the kids.) This is well-worn territory and hardened horror fans may feel a bit of déjà vu. Nonetheless, the tension is high and there are enough genuinely creepy moments and unforeseen twists which manage to keep the proceedings afloat and interesting.

Now the ending. Without spoiling anything, the final two scenes of Berkshire County are respectively sinister then “Holy Shit” enough to leave an indelible impact. There’s also a brief post-credits coda which serves as a suitably unsettling bookend.

In the end, if Berkshire County falls short of an absolute must see, it certainly is a solid recommend based on the formidable performance of King combined with the creepiness of the antagonists, the strong set up and the unforgettable denouement.