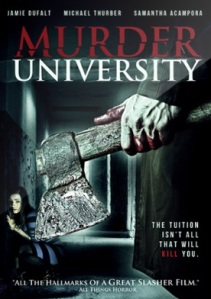 A dynamite theme song launches Murder University, a film that passes the horror sniff test even if it’s not quite grad school-bound.

The tone is set nicely, as Greensboro College’s lurid history is explained while co-eds explore a creepy house. We learn that the institution’s founder was a mass murderer and that this tradition has carried on to the present day (actually, 1983). We learn this before our tour guides are murdered by cult killers wielding axes and wearing Japanese noh masks.

The film’s set in the 80s, during the height of the slasher era (there’s even a yearbook montage straight out of Prom Night, even if the director concedes most colleges don’t have yearbooks). This is a great conceit because they can get away with spirited classroom debate and having damn-the-torpedoes professors, both now largely absent in collegiate “cocoons of self-indulgence” with their “safe space” concerns. 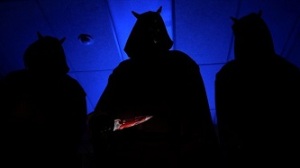 There are no safe spaces at this Murder U., as the student body become bodies. All the while, it’s business as usual on campus, with Juicy K Thunder, the campus DJ, throwing “empowering” wet shirt contests at the student dive.

Our hero Josh Green (a terrific Jamie Dufault), a nebbish paired up with a gregarious would-be pornographer roommate in the dorm, is soon stabbed (in a quite hilarious scene we find out that “they missed all of his vital organs!”).

He quickly recovers and meets up with Meg, the daughter of a local detective Forrester, who has a hunch that the “killers are in some way affiliated with the school.” Meg and Josh do some investigating, checking out the local Greek scene, attending a frat party and becoming physically close despite hard-ass dad’s stern rant (“You college kids are all alike, listening to Jethro Tull and wanting to f*ck my daughter!”)

There are beheadings aplenty, a super gory scalping and some great one-liners (“I’ve been stabbed before and it didn’t take”) as Josh, Meg and Detective Forrester get the inside scoop on a strange Skull & Bones-type society.

Murder University takes a strange tonal shift toward the end and doesn’t really have a genuine period aesthetic but it’s a solid horror comedy that’s well worth a look.