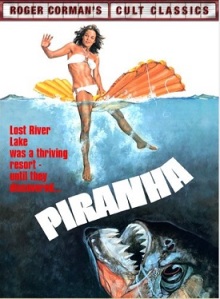 In many of these films, the script’s a stagnant pool — but thanks to John Sayles (he of Alligator and The Howling) things flow smoothly in Piranha.

When an amorous couple go missing in a California resort town, an insurance investigator (Maggie) is called in and enlists the help of a crusty guide (Paul), in this, an homage to 50s B conventions:

Paul: If they had drowned in here, wouldn’t their bodies be floating on top by now?
Maggie: No, not necessarily…It takes a while for the body to bloat with gas.
Paul: Nice business you’re in!

While on the hunt, the duo stumbles upon Operation Razorteeth, a secret government military program to destroy enemy river systems, sentineled by a female scientist and graduate of the George Zimmerman School of Security Guarding — attack first and ask questions later.

They manage to subdue her after a skirmish, but not before accidentally draining a pool at the test site. And we know what’s in that pool! You see, it was part of a plot to develop killer fish that would live in any type of water, which, as far as plots go doesn’t seem as efficacious as developing an airborne virus that would reign down a plague on your enemies.

Still, the fish manage to wrack up a high body count including a dog, that  scientist, a black fisherman who bemoans the lack of quality, domestically-produced fishing nets (when his mesh is chewed through he proclaims “Taiwanese-made crap”. Ah globalization) and lots of people unlucky enough to be downstream.

Like Humanoids from the Deep, this is another Corman homage to The Creature from the Black Lagoon complete with amoral corporate interests:

“I remember you. You were big news for about 15 minutes or so. You lost that case against the Save the Gay, Feminist Cambodian Whale Group that shut down the smelting plant. Now you figured you’d get payback against us corporate types!”

There’s a high body count, gobs of nudity and crackerjack dialogue: “The piranha are coming! You’ve got to believe me!”