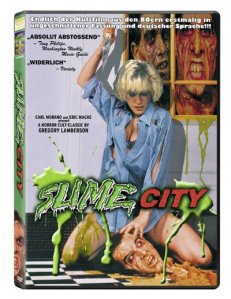 Gregory Lamberson — indie-horror hero. His 1988 urban-rot saga Slime City (see our prize pack at end of this post) is independent horror par excellence. Written, produced and directed by Lamberson at the tender age of 21 and made for a mere $50,000 (basically a tenth of the catering budget on the average big-budget Hollywood production, yet with a hundred times more entertainment value), Slime City has everything you want in a horror flick: killer torsos, nebulous “Himalayan Yogurt”, brutal beatdowns, an awesome score and copious amounts of disgusting, drippy, gooey, oozing slime.

Lamberson returned 23-years later with the sequel Slime City Massacre, an award-winning flick which began the horror auteur’s working relationship with scream queen Debbie Rochon. He is also a force in horror fiction, having authored 13 books including Johnny Gruesome, The Frenzy Cycle (a werewolf trilogy), and his latest novella Carnage Road. 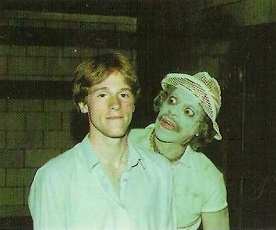 His latest film is the succubus saga Dry Bones. In the flick, young Drew is petrified of the monster hiding under his bed. However, unlike the monsters that many of us have imagined as children, this one is very real. The monster kills Drew’s father, effectively traumatizing the boy for life. Thirty-five years later and Drew has grown into a frightened adult dependent on psychologists and medication to repress the horrific memories. When he returns home to sell the childhood house, old fears resurface and the people whom Drew encounters begin to dwindle and disappear.

We at Really Awful Movies had the pleasure of interviewing Greg Lamberson, where we chatted about Slime City, Dry Bones, and his upcoming release Killer Rack.

How’d you decide to cast unassuming everyman Robert Sabin in the role?

I wrote the part of Alex for Robert. It was an easy choice: he was the only actor I knew at the time! We worked at the same Manhattan movie theater, and for a week he stayed at the same dorm I did. When I volunteered to work on I Was a Teenage Zombie as the production manager, I brought Peter Clark, who would shoot Slime City, on as the assistant cameraman, and Robert on as a cast member. Slime City was already written, and we knew we were going to make it, and this was a way for us to “train” for our production.

The lead pipe beating of the homeless man was especially gruesome (and still is, and the foley effects are fantastic). What inspired that scene?

The idea of Alex killing a bum came from Stephen King’s novella Apt Pupil. In the original script, he lured another bum into his basement and killed him before the bottles of elixir. We never shot that, though, it seemed redundant. I’m not sure where the idea of the pipe as a weapon came from. That scene was a lot more graphic in the first cut – it just went on and on until it became funny.

The ghetto blaster scene made us laugh out loud. How’d you come up with that scene?

I sit at my keyboard – or manual typewriter, back then – and create as I go. I don’t over plan and I don’t over analyze, I just create. I’ve had thirteen books published, you know, there’s a lot up here.   I was tapping into the denizens of Slime City – the derelicts, the whores, the hoods. So I needed a scene with hoods. The actual gag with the ghetto blaster was the idea of Peter Clark, the co-producer and director of photography. It was one of those spur of the moment, “Hey, it would be great if…” inspirations. Peter died back in 2000. We went to the NY School of Visual Arts together. By the way, this year is the twenty-fifth anniversary of Slime City’s midnight run. We just had a sold out screening of the original16m print at the Alamo Drafthouse Ritz in Austin, and Strange Disc Records is about to release Rob Tomaro’s score for the film on Vinyl. 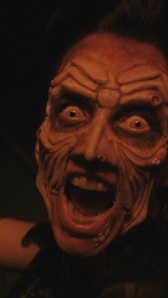 Writing Dry Bones was a collaborative effort between you and lead actor Michael O’ Hear. What individual elements did the two of you bring to the table?

Michael hired me to write the screenplay. He’s a character actor and wanted a lead role.   He knew he wanted to tell a story about a succubus, and that the lead character returned to his old house and heard voices, and had been afraid of something under his bed. A succubus and a monster under a bed are two different stories. I had an old idea about a shape changer who assumed many different female roles in her pursuit of a man.   I combined the two ideas and wrote the whole thing in four or five writing days stretched out over a month. We agreed to make it like an 80s horror comedy. I ended up producing it, because I’ve written things for other people that never got made, and I ended up directing it because Michael became really ill. He rehearsed the actors before shooting began. It’s a really quirky film.

Dry Bones seems to be about childhood fears and nightmares made manifest and continuing to haunt into adulthood despite attempts to repress. Why did you chose to explore this theme and what childhood fears still haunt Greg Lamberson to this day?

The opening scene was a lot of fun, but far from original. I’d written a similar scene in my werewolf novel The Frenzy Way, and Stephen King wrote one in Cujo. Michael hired me to write this script, and wanted to touch on old fears coming back. There was also a novel called Old Fear many years ago, but neither of us read it. I never really had any childhood fears. I did experience the old “clothes on a chair are not a monster” night once, so I related to that scene in Cujo. I sleep soundly at night, and rarely even remember my dreams.

Of all the monsters that could have been chosen for Dry Bones, why a succubus? Is it symbolic in any way?

Again, this was Michael’s idea, but a succubus lends itself to scenes involving sex, and those are always fun in horror films. We certainly had fun with them!

You seem to have a good working relationship with Debbie Rochon? How did the two of you become acquainted and what insights could you give us into one of the reigning scream queens?

I’d never seen a “Debbie Rochon film” until my friend Justin Wingenfeld premiered Skin Crawl at a con, and her performance really impressed me, and I told her so. While writing my book “Cheap Scares: Low Budget Horror Filmmakers Share Their Secrets”, I saw her in a couple of other films, which impressed me just as much, and I contacted her about a blurb for the book, which she provided. We didn’t meet formally until she came to a con in Buffalo, and seemed to hit it off because we had a similar background, as far as making micro-budget movies in NYC. From there, I cast her in Slime City Massacre. Debbie’s one of the hardest working people I know, and one of the most talented. When she shows up, she’s all about the work, and how she can make a film better. There’s no nonsense with her, she has a real work ethic, and she works well with everyone on set, from actors to crew to support people. She’s a first rate actress. 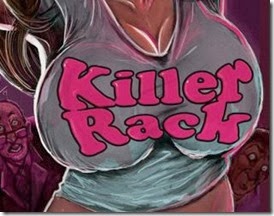 We cannot wait to see this one. When can we expect it and could you give us a taste as to what awaits us when we finally do see it?

The screenplay was written by my friend Paul McGinnis, who’s in it, and it’s the first feature script I’ve directed written by someone else. It’s very silly and very funny, and after passing through my hands, it’s now also very bloody. It’s a bigger looking film than anything I’ve done since Slime City Massacre, and has 40 characters in it. About the first 25 minutes have been edited, and it’s coming together nicely. Brett Piper is doing some stop motion animation. My plan is to take my time unveiling it, and to take it on the film festival circuit before I even worry about distribution. I know people are going to love it. Debbie has a large role in it as a mad scientist, Dr. Thulu, and my lead actress, Jessica Zwolak, did a phenomenal job. Michael O’Hear plays a grizzled detective, and Bob Bozek, who’s appeared in my films dating back to SCM, plays Debbie’s assistant, and should become a cult hero after this one.

We at Really Awful Movies have three copies each of Dry Bones and Slime City Grindhouse Collection to give away, courtesy of Alternative Cinema/Pop Cinema Studios.

To win, simply follow our blog via email by filling in your email address in the box on this page.

Contest closes on Wednesday, December 10. Winners will be chosen at random and will receive either Dry Bones or Slime City Grindhouse Collection. We will notify winners by email and you’ll receive the prize in the mail before Christmas. (Contest eligible to North American residents only but followers are welcome from anywhere!).