Toronto has been New York’s movie proxy so often you’d be forgiven for thinking it’s the sixth borough. Glazed eyes may blink in recognition at a Pizza Pizza sign behind Jim Breuer and Dave Chappelle in Half Baked but it’s easy to forget, especially in that condition, that Toronto is occasionally and very proudly itself too.

Our city has been showcased in some very good horror movies both as itself, and like the very best serial killers, while assuming a hidden identity. Here are our Top 7 Toronto Horror Movies. 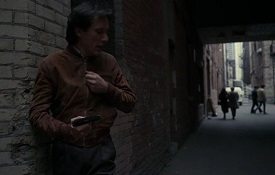 At Yonge and Wellington

We are justifiably proud of our local hero David Cronenberg. One of a handful of filmmakers whose name has become an adjective (Cronenbergian), the king of body horror has been feted by peers no less esteemed than Martin Scorsese (“No one makes movies like his”) and John Carpenter (“Cronenberg is better than all the rest of us combined.”) Truthfully, since the University of Toronto grad shoots and sets many of his films in his native land, we could feasibly populate this list with all things Cronenberg. However, we’ll limit ourselves to two beginning with what is possibly the filmmakers’ most Toronto-centric film, Videodrome.

Videodrome is vastly ahead of it’s time. Prophetic and terrifying in its vision and message, Videodrome is a surreal mindfuck. It examines a world where television screens are the literal retina of the mind’s eye, broadcast signals give you fatal brain tumors and the television literally reaches out to touch you (and other acts more unspeakable.) It’s a world of the “new flesh”; a graphic fusion of the biological and the technological. Reality TV indeed.

James Woods plays Max Renn, president of Civic TV, a station modeled after Toronto institution City TV. In its early days, City TV was (in)famous for its late night “Baby Blue Movies”-  in actuality soft-core films. In the film, Civic TV is a sleazy station which airs salacious, pornographic content. However, Renn wants to push the envelope further.  When an employees discovers an encoded video transmission entitled “Videdrome” depicting actual murder, torture and dismemberment, Renn becomes obsessed with finding the source of the transmission. His search leads Renn down a rabbit hole of danger, hallucination and madness.

Besides being set squarely in Toronto and featuring an analogue of City TV (one of Renn’s partners is named Moses, a reference to City TV founder Moses Znaimer), the film also features media guru Professor Brian O’Blivion, a character modeled after Marshall McLuhan who was one of Cronenberg’s professors at U of T. 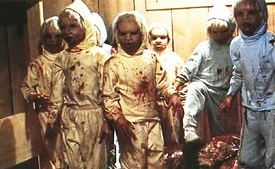 The second Cronenberg film on our list is 1979’s The Brood. Touted as the director’s most audacious film, The Brood tells the tale of psychologist Dr. Raglan (Oliver Reed) and his unconventional therapy techniques practiced on institutionalized women. Dr. Raglan encourages his patients to express their inner rage which then outwardly manifests in the form of warts and cysts all over the patients’ bodies. Unfortunately, one of Raglan’s patients is the unstable Nola, a woman whose rage is so potent that she gestates large fetuses from her skin that rapidly mature and emerge as hostile mutant children who beat and batter the sources of Nola’s rage, particularly her ex-husband.

The Brood is one of the last films to show the interior of the old Toronto police headquarters on Jarvis St., as the headquarters were soon relocated to College St. The original building has since been torn down, as many Toronto landmarks have, to make room for very scary condos (both aesthetically and when cut-rate glass falls on you).

Bracebridge, Ontario-born Mary Harron’s adaptation of Bret Easton Ellis’s controversial novel is meant to be set in New York, but like many films, uses Toronto as a surrogate. Featuring an iconic, pre-Batman performance by Christian Bale as Patrick Bateman, Wall Street investment banker by day, deranged serial killer by night, American Psycho is a must see film that does justice to, and in many ways surpasses, its source material. The uber-graphic novel was deemed unfilmable, yet Harron expertly replaces many (though not all) of the novel’s most graphic scenes with suggestion and still manages to unsettle the audience by credibly capturing the soulless, homicidal monster that is Bateman and the superficial, materialistic world that he operates in.

Much of the film was lensed in the financial district of Downtown Toronto. Other notable city locations include Cabbagetown, the Phoenix Concert Theater, The Senator Restaurant on Victoria St. as well as the departed Shark City Bar and Grill and the John St. location of Montana’s.

Putting a female-perspective on the old Lycanthropic legend, Ginger Snaps is simply one of the best werewolf films ever made.

Drawing an analogy between becoming a woman and becoming a werewolf, Ginger Snaps is the story of two sisters, Brigitte and Ginger.

On the night Ginger (played by the awesome Katherine Isabelle who would later go on to kick some serious ass in the Soska Sisters’ incredible American Mary) experiences her first period, she gets bitten by a werewolf. Soon, hair begins to sprout from Ginger’s wounds; she grows a set of fangs and a tail and menstruates heavily. She also experiences extreme changes in her temperament and disposition. Her sister desperately tries to cure her, but ultimately Ginger seems less and less interested in being saved.

The gore and brutality in this one is off-the-charts and the transformation and creature effects, god bless them, are practical.

The film was shot in Scarborough as well as Brampton, Markham and Mississauga. It spawned two quite decent sequels and deserves to be spoken of in the same breath as The Howling, An American Werewolf in London and Dog Soldiers.

The feature debut of Detroit-born, Toronto-raised Vincenzo Natalie, Cube is a horror/sci-fi masterpiece. Written and directed by the Ryerson University alum, Cube depicts six disparate individuals awakening in separate glowing cube-shaped rooms with doors on all sides. Each door leads to another room, all identical in size and shape. However, some of the rooms are set with lethal booby-traps such as flame throwers and flailing razor-wire. The six strangers have no idea how they got there or why they have been imprisoned, but they soon realize that if they have any hope of escaping, they must pool their distinctive talents and work as one to make their way through the cube.

Cube depicts a Kafkaesque nightmare where paranoia and claustrophobia threaten to overwhelm the protagonists. The film is a triumph of set design and lighting and shows how creativity and ingenuity, in the hands of a gifted filmmaker, could prevail over a limited budget ($365,000 CAD although it looks as if it cost ten times that.) Cube was shot on a single set at Toronto’s Wallace Film Studios and was the last film released by Canadian distribution company Cineplex Odeon Films before it was absorbed by Alliance Atlantis.

A highly original horror musical set in 2056, Repo! The Genetic Opera is a dystopian vision of a world where organs are failing en masse. Enter mega biotech conglomerate GeneCo who will sell you an organ transplant for a hefty price. Luckily, like Leon’s, they offer an installment payment plan, but if a payment is missed, the Repo Men will hunt you down and remove your organs graphically and painfully.

Repo features 58 songs and an eclectic cast comprised of both singers and non-singers. Featured are Paul Sorvino, Nivek Ogre of Canadian industrial music legends Skinny Puppy and opera and Broadway superstar Sarah Brightman in her film debut. Joining them are Anthony Head of Buffy fame, Bill Moseley of Texas Chainsaw Massacre 2 fame and, uh, Paris Hilton of Paris Hilton fame. The film is a marvel of sight and sound and features incredible costumes designed by Torontonian Alex Kavanagh. Repo was shot in Cinespace Film Studios and received a very limited theatrical release. It then toured around “Roadshow” style and had a sold-out engagement at Toronto’s Bloor (now Hot Docs) Cinema.

Horror fans where outraged when news broke that Zach Snyder had the audacity to remake George Romero’s 1978 classic where the dead roam the earth and invade a shopping mall. Fears were alleviated somewhat when it was announced that local indie and critical-darling Sarah Polley would be taking a lead role. While not quite reaching the heady heights of its predecessor, the Dawn remake proved to be one of the few examples of a horror-remake doing service to the original (another being Cronenberg’s Toronto-lensed take on The Fly). Even Romero himself professed to being impressed with the film.

The ’78 Dawn was filmed at night in the fully-operational Monroeville Mall, located just outside of Pittsburgh. The ’04 version chose as its location Thornhill Square Mall, located in a suburb just outside of Toronto. Truthfully, before filming even began, Thornhill Square was more Monroeville than the actual one (which even now remains a thriving shopping centre.) With its few remaining open stores and handful of shoppers, the filmmakers could have shot the flick on a regular Saturday and no one would have noticed. Instead, the mall was shut and the interior completely renovated and populated with fictitious stores. Shortly after filming concluded, the mall was demolished. So while Dawn of the Dead pilgrimages and tours continue in Pittsburgh to this day, those who wish to make the same trek to Toronto will have the privilege of visiting an empty parking lot. Other locations included: Brampton, Bolton, Regent Park and Ashbridge’s Bay.